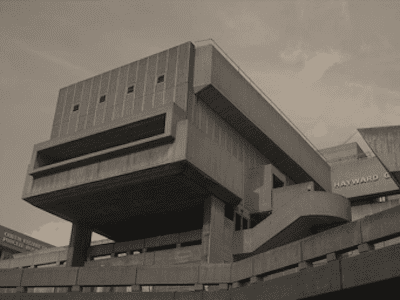 What is significant today will not be significant in the future nor was it in the past. How conscious are we of the ever-shifting platform of relevance? Who would have thought 35 years ago that Brutalist buildings of the late 60s and 70's are today considered significant? How strange it is to have 1970s drab brickwork suburbia now come in for listing. The very architecture that we as young and keen architects rejected 35 years ago is the stuff that people now find interesting. The ugliest, most in-your-face buildings, bloated, over- scale bulked up and arrogant not to mention zero concern for the environment, ignorance of the scale and texture of the immediate surrounds and horribly brash materials. These are the very buildings that are now proposed for listing. Why?

The Brutalist story in Australia is brief and here it is told by Peter Mould – previous NSW Government Architect; Brutalism was adopted in Sydney and helped inform the movement that became known as the Sydney School. This school was a direct response to the local context and, particularly, Sydney's bushland setting. The influences on it were many and individual strands evolved. Apart from the brutalist movement from England, other influences were: Scandinavia, particularly the work of Alvar Aalto; the organic school exemplified by the work of Frank Lloyd Wright; and the architecture of Asia, particularly Japan, which was seen to be human, accessible and sophisticated. The 1960s and 1970s were prodigious times in the office of the Government Architect and buildings ranging across multiple types and uses were designed in the manner of New Brutalism. Hospitals, police stations, courthouses, schools, TAFE and CAE colleges, university buildings, and a suite of government office buildings were constructed across the state. There were many works making strong statements about the role and presence of government in local communities. 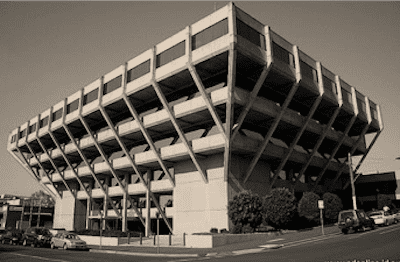 Mould indicates that Brutalist buildings were self-referential and oblivious to their setting, and were placed uncomfortably in their context. They generally used off-form concrete in a muscular way to give sculptural form and texture. They used a limited palette and brought outside finishes inside, and had strong spatial qualities. (Peter Mould – Architecture Bulletin 2012).

Brutalism has some severe critics, including Charles, Prince of Wales. His speeches and writings on architecture have excoriated Brutalism, calling many of the structures "piles of concrete" (Glancey, 2004).

Critics of the style find it unappealing due to its "cold" appearance, projecting an atmosphere of totalitarianism, as well as the association of the buildings with urban decay due to materials weathering poorly in certain climates and the surfaces being prone to vandalism by graffiti. Despite this, the style is appreciated by others, and preservation efforts are taking place in the United Kingdom (Wikipedia).

Outrage and vocal distaste for Brutalism was led in part by Christopher Alexander and the initiation of The Oregon Experiment in the late 1970s. Alexander's writing led to his writing of architectural and town planning theories and approaches [A Pattern Language and The Timeless Way of Building]. These books became text books for young designers eager to embrace a softer more responsive, environmentally friendly approach. In recent years, the bad memories of under-served Brutalist community structures have led to their demolition in communities eager to make way for newer, more traditionally-oriented community structures. 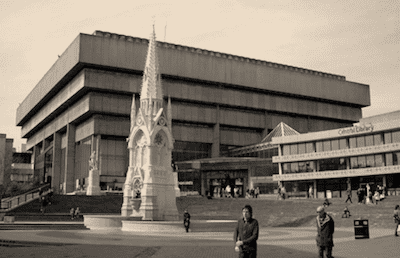 Anthony Daniels, a British author and political commentator has written for City Journal that Brutalist structures represent an artefact of European philosophical totalitarianism, a "spiritual, intellectual, and moral deformity." He called the buildings "cold-hearted", "inhuman", "hideous", and "monstrous". He stated that the reinforced concrete "does not age gracefully but instead crumbles, stains, and decays", which makes alternative building styles superior (Dalrymple, 2009).

Designed and built between 1975 and the mid-1980s, Brutalism architecture constitutes a reaction to the abstraction associated with international modernism according the heritage application lodged by the Australian Institute of Architects Queensland chapter which wants to list many of Brisbane's ugliest Brutalist buildings on their heritage register (Chua & Wheeldon, 2014).

Apperly et al write that the twentieth century thrived on change and the early years of the post-war period saw a shocking change of attitude on the part of many leading architects of the modern movement. In Europe, the International style of the 1920s and 1930s had favoured lightness, transparency, a seamless smoothness of surface and the elimination of everything 'unnecessary. This was influenced by the post-war work of Le Corbusier. Following his lead, many architects adopted an uncompromisingly hefty, chunky aesthetic and were 'brutally' frank about showing the world what their buildings were made of in terms of materials and services.

Apperly writes that the morality which Pugin, Ruskin and Morris had introduced to nineteenth- century architecture was thoroughly disinterred, pumped up and flaunted for all to see. 'Let it all hang out' applied to architecture in the 1960s and 1970s.

The typical Brutalist building was large, tough, and rather over-powering with blocky shapes jostling each other aggressively. The favoured material both outside and inside was reinforced concrete bearing the imprint of its formwork. The delicate balustrades and hand-rails of the 1930s were superseded by solid, over-scaled elements. Services were proudly exposed, and it was no longer derogatory to say that a building 'looked like a factory (Apperly et al, 1995)'.

The Late Twentieth-Century Brutalist style made its appearance in Australia in the mid-1960s. The style's insistence on off-form concrete made it necessary for architects and builders to pay great attention to the design and quality of formwork. As happened in most parts of the world where Brutalism became popular, a paradoxical situation arose when enormous care had to be taken to obtain exactly the right degree of 'artless' roughness. For high prestige buildings, precast concrete panels with a factory-controlled texture were often preferred to the less predictable off-form concrete. After the passage of several decades, some Late Twentieth-Century Brutalist buildings have not responded well to the ravages of time and weather (Apperly et al, 1995). 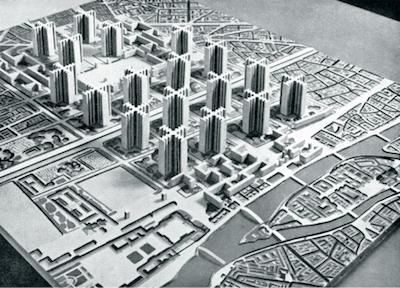 As an architect approaching the age of 60, I find myself pondering the incredible. I am almost offended by the way young architects today have come to admire the repugnant style. Perhaps it is some form of distorted masochistic fetish. Hopefully the fascination will soon pass. However, if it becomes entrenched and coteries of acolytes gather to pronounce the style important and significant, then I should stop practicing as an architect because to my mind, it would wash away everything that we have gained since the mid-1980s i.e. heritage conservation, sustainability, environmentalism, cultural landscapes, UNESCO world heritage listing, participatory planning and an effort to study the local context in detail before imposing a design upon it. It would be a sad day to witness a recurrence of the most abhorrent style of architecture ever conceived since the day that mankind started building.

Looking back to Brutalism, Dalrymple writes that the founder of the style, Le Corbusier was to architecture what Pol Pot was to social reform. In one sense, he had less excuse for his activities than Pol Pot: for unlike the Cambodian, he possessed great talent, even genius. Unfortunately, he turned his gifts to destructive ends, and it is no coincidence that he willingly collaborated with both Stalin and Vichy. Like Pol Pot, he wanted to start from Year Zero: before me, nothing; after me, everything. By their very presence, the raw-concrete-clad rectangular towers that obsessed him cancelled out centuries of architecture. Hardly any town or city in Britain, Europe, America, Africa or Asia has not had its composition wrecked by architects and planners inspired by his ideas (Dalrymple, 2009).