I was having a conversation with Gary Estcourt (Senior Heritage Project Officer - Heritage Near Me at Office of Environment and Heritage, NSW) recently via Linked-in. Gary commented on a blog of mine entitled ‘In the future everything will be significant for 15 minutes’ – an analogy to the late American artist Andy Warhol who stated in 1968 that in the future everybody will be famous for 15 minutes. Mr. Estcourt’s comment in reply was that ultimately all heritage is for the benefit of the community and I fully agree with him on that score.

However, in regard to cultural built heritage, who and what is the community? Is it confined to people who live in a heritage area or is it the greater public i.e. anybody who comes into contact with a heritage precinct or may one day come into contact with a particular heritage place? Does it exclude owners of heritage properties or are the concerns of owner’s equivalent to those in the community? Does it include government; say local governments who regulate heritage and development and therefore also have an interest in cultural built heritage or does the community apply to everybody and anybody who has a heritage concern of any nature or type? Perhaps, it is all of these and yet indefinable in terms of area, number and nature. A community may be loosely referred to a a group of people who share a concern about some matter that affects all in the group.

An example of this is Windsor Bridge in NSW. The NSW Government is currently seeking to fund a project to help improve traffic flow across the bridge that will provide a reliable and safe crossing of the Hawkesbury River (ref 1). However, some in the community in the area is dead set against such a proposal. As the map below illustrates, the heritage bridge is to be replaced with a new structure and will run immediately into Thompson Square which is full of heritage listed structures including Thompson Square itself which is a designated conservation area. 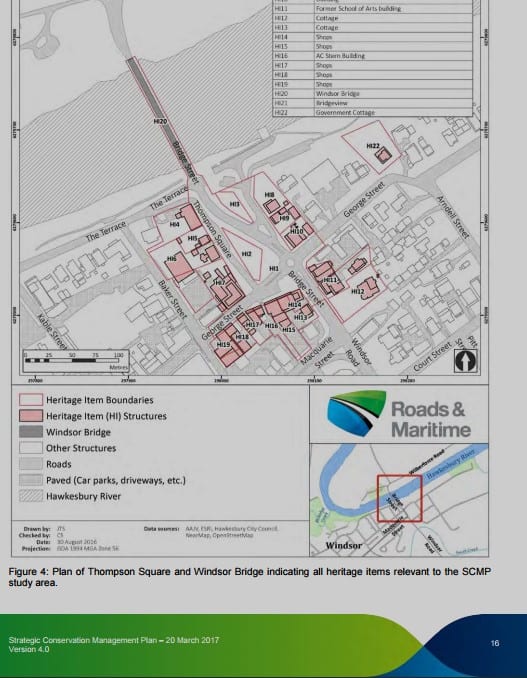 Local residents and shop owners feel aggrieved by the proposal and in particular, they are concerned by increased vehicular traffic through the Thompson Square Conservation Area and the negative impact it would have on the heritage place. They fear heavy laden trucks along with fumes and noise passing through the square in the future if the NSW Transport Roads and Maritime scheme goes ahead.

In fact, so concerned is the local community that it has formed a group called ‘Community Action Windsor Bridge – CAWB’. To show their disaffection, they have camped in Thompson Square for more than 3 years and maintain a 24-hour vigil, 7 days a week. CAWB has raised a petition against the bridge/ square scheme and has more than 13,000 signatures in its support. The National Trust has recognised the hard work that CAWB has put into the protest and has awarded it the 2015 ‘National Trust Community Advocacy Award’.

CAWB is an example of how strong, political and vociferous a heritage community can get. It is a fine example of the sorts of reaction people get when they do not put enough care and respect into their planning schemes – especially when it comes to heritage places.

The SCMP - Strategic Conservation Management Plan (ref 2) concludes on Pg.175 that over the years, there have been many physical changes to Thompson Square, ‘however, it remains a place with a rich history and is valued highly by the community, for both its physical amenity and what it represents about the history of Windsor and the early colony of New South Wales’.