According to a new paper by Mualam and Alterman (see reference below), appeals concerning built heritage are frequently structured as a contestation between two poles: between public and private concerns, and specifically between a pro-conservation approach (often stressed by planning authorities) and a pro-development approach (often stressed by the developer\owner of property). In the setting of appeals, while the first pole is tilted toward public benefits, the second emphasises the interests of private bodies. Indeed, these two approaches generally overlap as there are avenues to accommodate both private and public interests. However, the approval process associated with cultural built heritage is fraught with a diverse range of interests and concerns. In the table below, the Mualam and Alterman issues are summarised as follows; 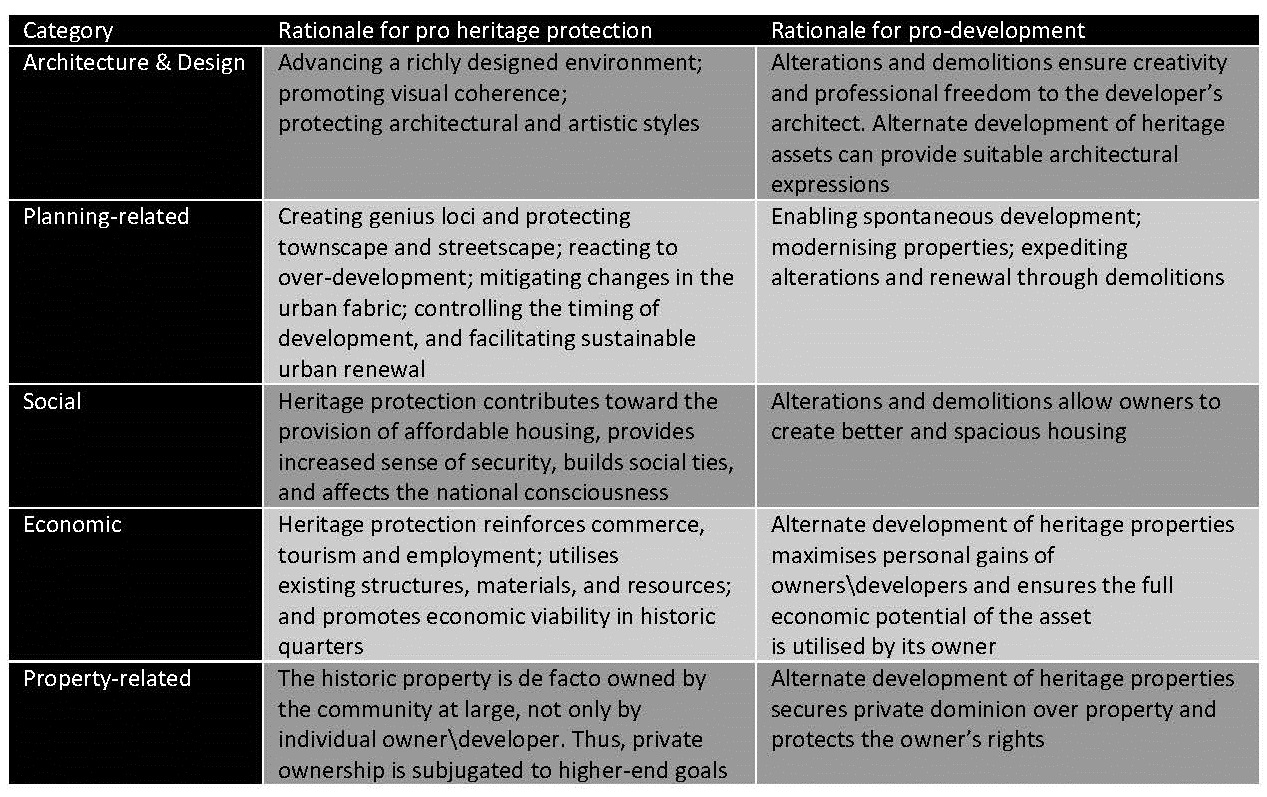 Clearly, the development and pro- conservation approaches are like ships passing in the night. Will there ever be a happy medium? Can one ever resolve the differences? These questions go to the core of most state policy decisions regarding the balance between the two but ultimately it comes down to bias.

There are those in the community who aspire to the valorisation of heritage as a public good and there are those who approach the issue with a more selfish self-aggrandising attitude. The one camp sees good in public assets such as heritage buildings and the other group seeks only to derive personal wealth from land uses. Therein lies the conflict which is illustrated in the table above.

Personally, I doubt whether the problem will ever be resolved. Although, I look to the UK and see that there is a far greater consensus in the community there that positively acquiesces to the conservation of heritage and that this has been brought about over many years through government promotion of cultural built heritage as a public good which we do not have here in Australia. In the USA too with their system of landmark buildings and historic tax credit program, cultural built heritage is actively promoted through the income tax system. Sadly, in Australia, although we have good legislation, we lack incentives for heritage in order to make it worthwhile for an owner to conserve the heritage buildings that they own.

Reference: Nir Mualam & Rachelle Alterman (2017): Looking into the ‘black box’ of heritage protection: analysis of conservation area disputes in London through the eyes of planningvinspectors, International Journal of Heritage Studies.