Michael Wolf – author of ‘Corner Houses’ published in 2010 by Hong Kong University Press writes that there are two major historic events that are fundamental to the creation of the post WW2 Shop Houses. The first is the Korean War (1950–53), the effect of which made the Hong Kong government realise that its days of relying on entrepôt trade with China were over, and it needed to expand its manufacturing industry and diversify its exports to international markets. This significant economic shift was stated in no uncertain terms in the Hong Kong Annual Report 1954: The outbreak of war in Korea in 1950 quickly led to a marked decline in the Colony’s traditional entrepôt trade. It has therefore become increasingly important that local industry should be encouraged and that new products and new markets should be developed in order to provide employment for a population which already seriously crowded, is increasing by more than 50,000 each year.

Wolf indicates that the second historic event is the establishment of the People’s Republic of China in 1949. The Communist ideology of the new Chinese government instantly turned the British colony of Hong Kong into the sole surviving bastion of Capitalism in China and a haven for tens of thousands of Chinese refugees who fled their now anti-Capitalist motherland. While the post-1949 surge in Hong Kong’s population created a problem in terms of housing and employment, it also provided an inflow of capital from emigrant entrepreneurs and a cheap and ready labour force to fast track the expansion of manufacturing industries. Within a year after the end of the Korean War, Hong Kong managed to make a successful shift in its economic base. The accelerated rate of industrial development since the war was due in part to the arrival in the Colony of capital and skilled labour from the Chinese mainland. The population having increased so rapidly between 1945 and 1949, manufacturers had not only a large reservoir of efficient and willing labour to draw upon, but also a considerable local market for certain of their products. Many of the new industries which have grown up since the war have catered particularly for the large markets of South East Asia. 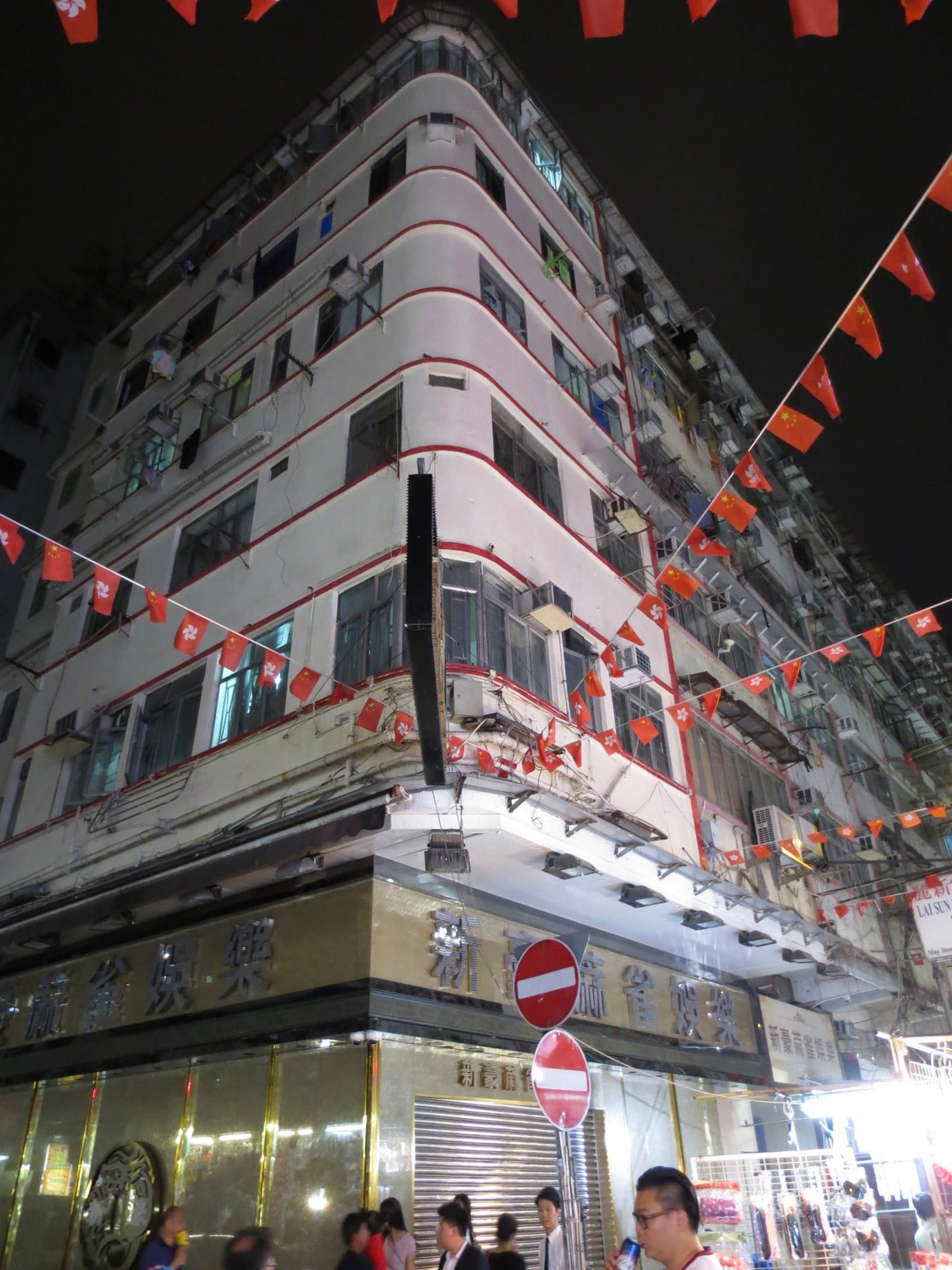 The impact of these developments was an increased demand for living quarters and workspace. But this was during a time when Hong Kong was only beginning to realise its need for buildings specifically designed for the modern demands of commerce, housing and industries. Until adequate supply of such dedicated buildings was met, the multi-purpose composite buildings became the default interim solution throughout the 1950s and 1960s. The prototypal source of these composite buildings came from Hong Kong’s pre-war Chinese shophouses, now commonly referred to as Tong Lau (Cantonese for “Chinese buildings”), which were the predominant form of urban property development in Hong Kong during the first half of the twentieth century.

Wolf writes that the form of the pre-war Chinese shophouses was directly influenced by the strictly enforced building regulations under the Public Health and Buildings Ordinance 1903 which stipulated standards for sanitary provisions and the construction quality of Chinese shophouses. This new ordinance primarily targeted shophouses built after the outbreak of bubonic plague in the overcrowded Chinese quarters of Tai Ping Shan in 1894.

One of the restrictions imposed on new shophouse development was building height, which was not allowed to exceed the width of the facing street. The underlying rationale for this height and width relationship was to ensure adequate sunlight penetration and natural ventilation of public areas. A secondary consideration for the height restriction was the inherent structural and fire-resistant limitations of the common form of construction during this period—walls of brick, and floor and roof structures of timber. As a result of this restriction, Chinese shophouses remained no more than three or four storeys in height during the first half of the twentieth century.

In post-Korean War Hong Kong, the overriding demand for housing rendered the building-height-and-street-width relationship obsolete and it was gradually discontinued. The prevalent application of sturdy and fire-resisting reinforced concrete construction and the more common availability of lifts made the erection of taller buildings economically and technically feasible. The trend for high-rise property development is revealed in the Hong Kong Annual Report 1957, in which it is observed “the tendency has been towards very much higher buildings.” To make development even more profitable, many developers exploited the insatiable market demand for properties, and took advantage of the 1955 Buildings Ordinance that allowed buildings up to nine storeys to be built without lifts. 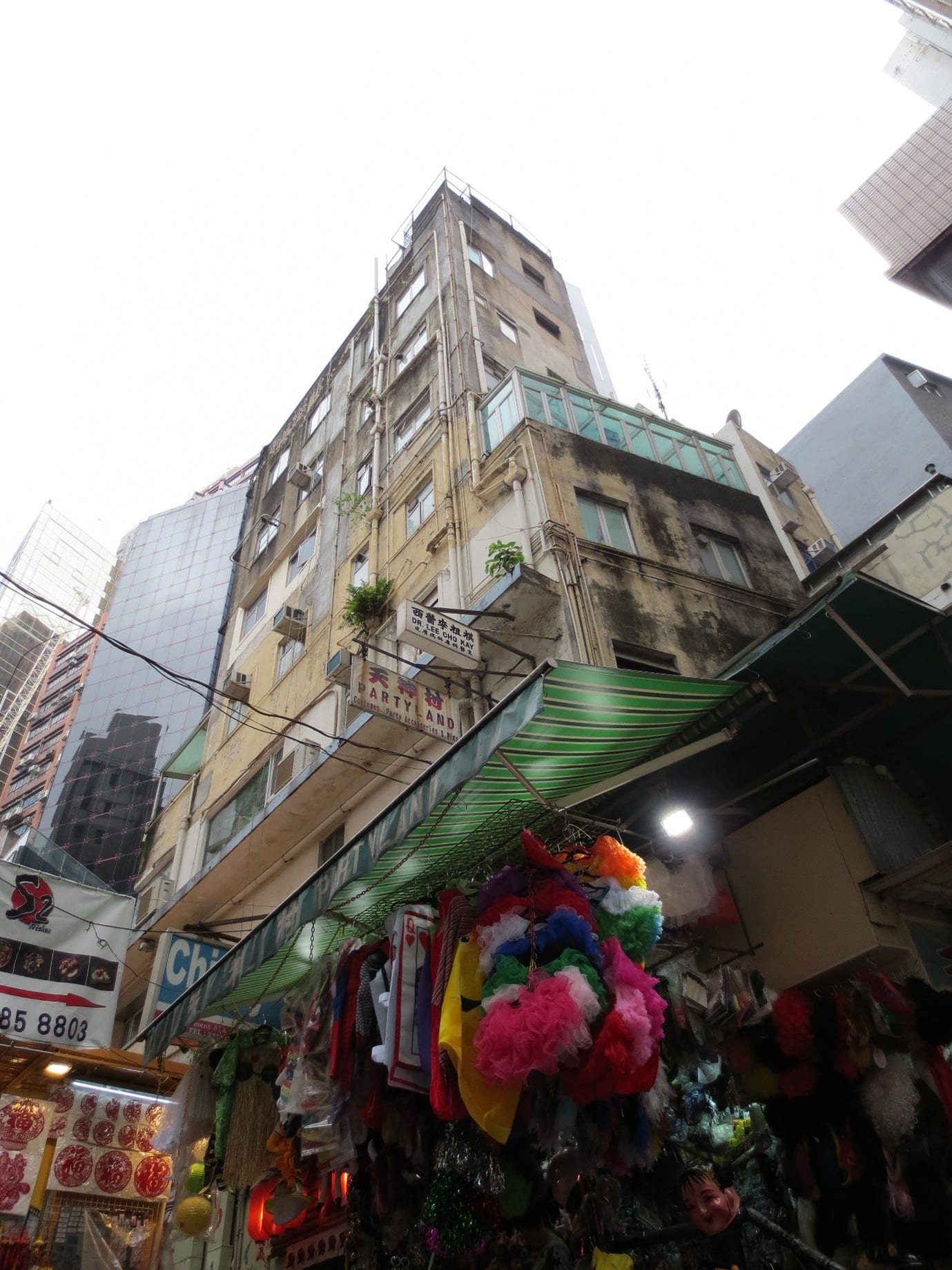 In pre-World War II Hong Kong, Wolf informs us that the most common form of mixed-use building was the traditional Chinese shophouse (Tong Lau). While the greater commercial potential of the ground floor ensured that the space remained almost exclusively for shops, it was not uncommon to have a mix of residential and commercial activities on the upper floors. The taller composite buildings that began to spring up in the urban areas of Hong Kong during the 1950s continued this tradition, but the mixture of residential and commercial usage on upper floors became richer because of a new trend in property development.

Historically, shophouses were developed as a series of units in a contiguous row, and they were sold unit by unit. This meant that a shophouse unit of several floors would belong to a single owner, who would let individual floors to tenants, who, in turn, would sub-let different parts of the floor to sub-tenants. In post-Korean War Hong Kong, the Tong Lau form of property development could not meet the increased demand for housing and commercial space, and developers saw the opportunity for greater profit by selling smaller individual units, floor by floor, and in taller and bigger buildings.

The increased number of tenants on more floors in post-Korean War composite buildings created a richer and more visible mixture of residential and commercial activities. As Hong Kong intensified its light manufacturing industries in the 1950s and the 1960s, upper-floor tenants of composite buildings exploited the increased commercial opportunities by operating small businesses and unlicensed cottage industries.12 A typical multi-storey composite building of this period could contain a variety of commercial outlets, from home-businesses, such as, trading companies, traditional Chinese medical practices, private schools and fortune tellers, to cottage industries that produced garment parts, toys and plastic flowers.

Wolf writes that as Hong Kong has become more mature and organised in its land-use policy and urban planning, it is hard to imagine the chaotic diversity of commercial activities that once existed in composite buildings. However, some vintage composite buildings still bear the marks of their intense commercial past. A good example is the 1963 May Wah Building that stands at the corner of Johnston Road and Wan Chai Road. This 12-storey, 80-unit building is covered from top to bottom with signage of functioning and defunct businesses that include a guest house, clan associations, hair and beauty salons, two Chinese tea shops, fashion retail shops, massage parlours, Western and traditional Chinese medical clinics, tuition schools, fortune tellers and a feng-shui consultant. Understandably, the concentration of such activities within the confines of a densely-inhabited building was, at times, a nuisance for neighbours and, at worst, a fire and health hazard for everyone in the building. 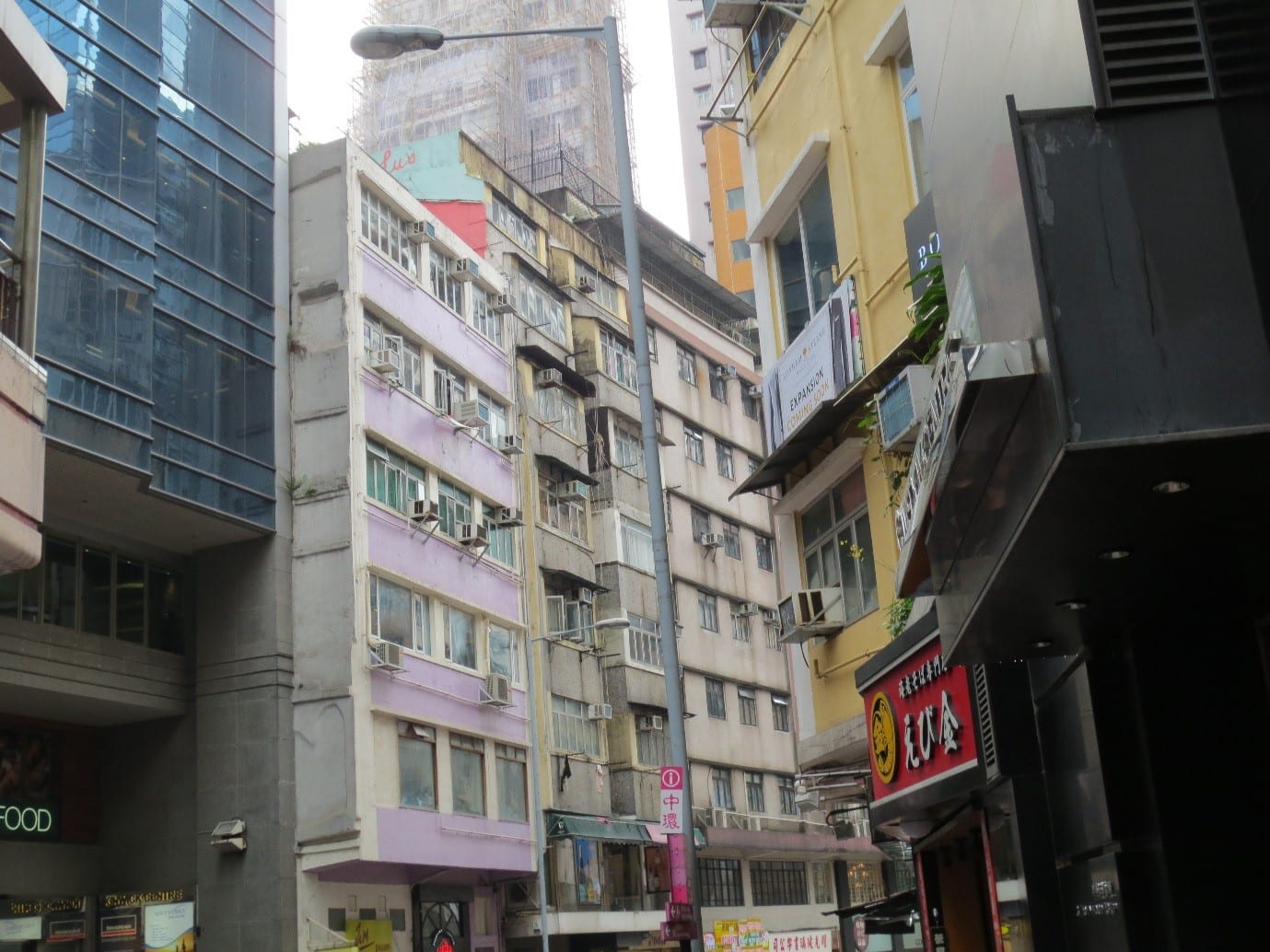 Wolf tells us that during this period, complaints to the authorities were almost unheard of. A tolerant and forgiving attitude abounded as the vast majority of urban dwellers in Hong Kong were struggling to make a decent living for their families. In any case, legislation against violations of fire safety and public hygiene was almost non-existent at a time when self-employment was tacitly allowed by the authorities, if not actively encouraged, in order to maintain social stability and economic growth among the ever-increasing population.

It was not until the introduction of a strictly enforced Fire Safety (Buildings) Ordinance in 1987 to regulate commercial premises that the “wild west” mixed use situation in composite buildings was tamed. In return for greater safety and uniformity, composite buildings lost their complex character of economic diversity and vibrancy, which had come to represent the fabled laissez faire image of Hong Kong.

In Wolf’s book ‘Corner Houses’, he writes that It is not difficult to imagine the pressure for space to cope with the intensity of mixed use in a composite building. But, from desperation came creativity, and the vertical surfaces of composite buildings of the 1950s and 1960s period were commonly festooned with numerous illegal structures. These structures were usually in the form of metal cages of slightly varying designs, and they clung like parasites to the host building. This gave the entire architectural composition the strangely organic quality of a vertical urban village, not unlike a scene from a sci-fi movie depicting an alien world. Such scenes were common in Hong Kong until the mid-1990s, when the government began to enforce the law against illegal structures on buildings.

Today, Wolf relates, the façades of these 1950s–60s composite buildings have been sanitized, and there are few visible signs of the illegal additions that once covered their surfaces. In spite of the government’s effort to remove illegal structures from buildings since the 1990s, many of the composite buildings of the 1950s and 1960s period still retain a form of illegal addition—enclosed balconies, a feature that actually enhances the volumetric characteristic of the typology. 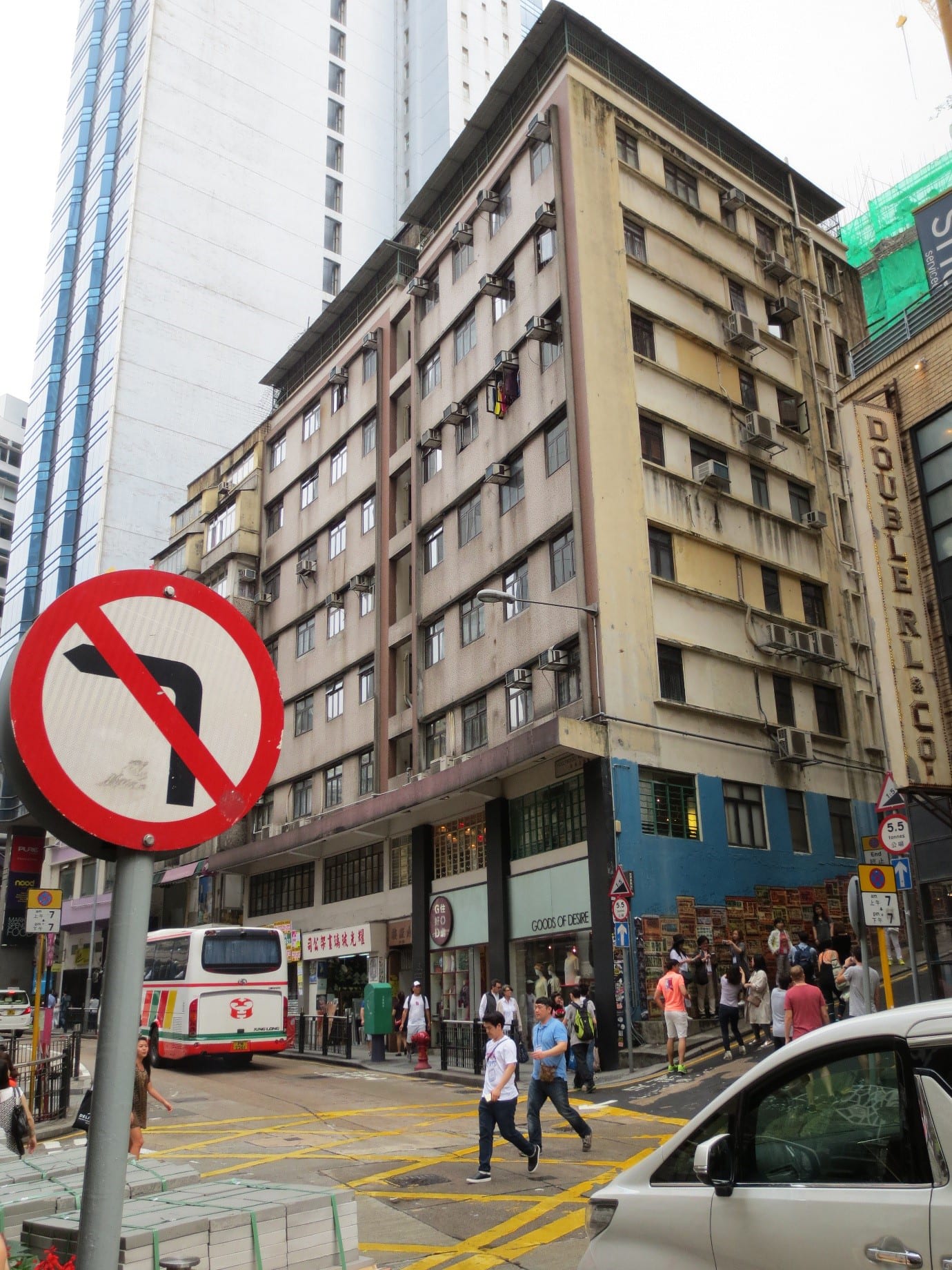 Cantilevered balconies were less common before the widespread use of reinforced concrete construction, which came into being in the late 1910s when Hong Kong adopted the 1915 London County Council Reinforced Concrete Regulations. Before this time, column-supported verandas of masonry and timber construction were the common form of projection from buildings. Almost all composite buildings of the 1950s and 1960s period were built with a continuous row of cantilevered balconies on their main façades, and these structures project over the pedestrian pavement, which is Government Land. The colonial administration allowed the construction of such structures without requiring developers to pay extra land premiums, for the reason that the cantilevered balconies provided pedestrians with overhead protection from the elements. But this came with the condition that these balconies must remain as balconies, meaning that they would not be enclosed as interior spaces.

However, Wolf writes, with the greatly increased population in Hong Kong after the war, the enclosure of balconies to provide additional living and working space became an expedient relief measure openly tolerated by the colonial administration. 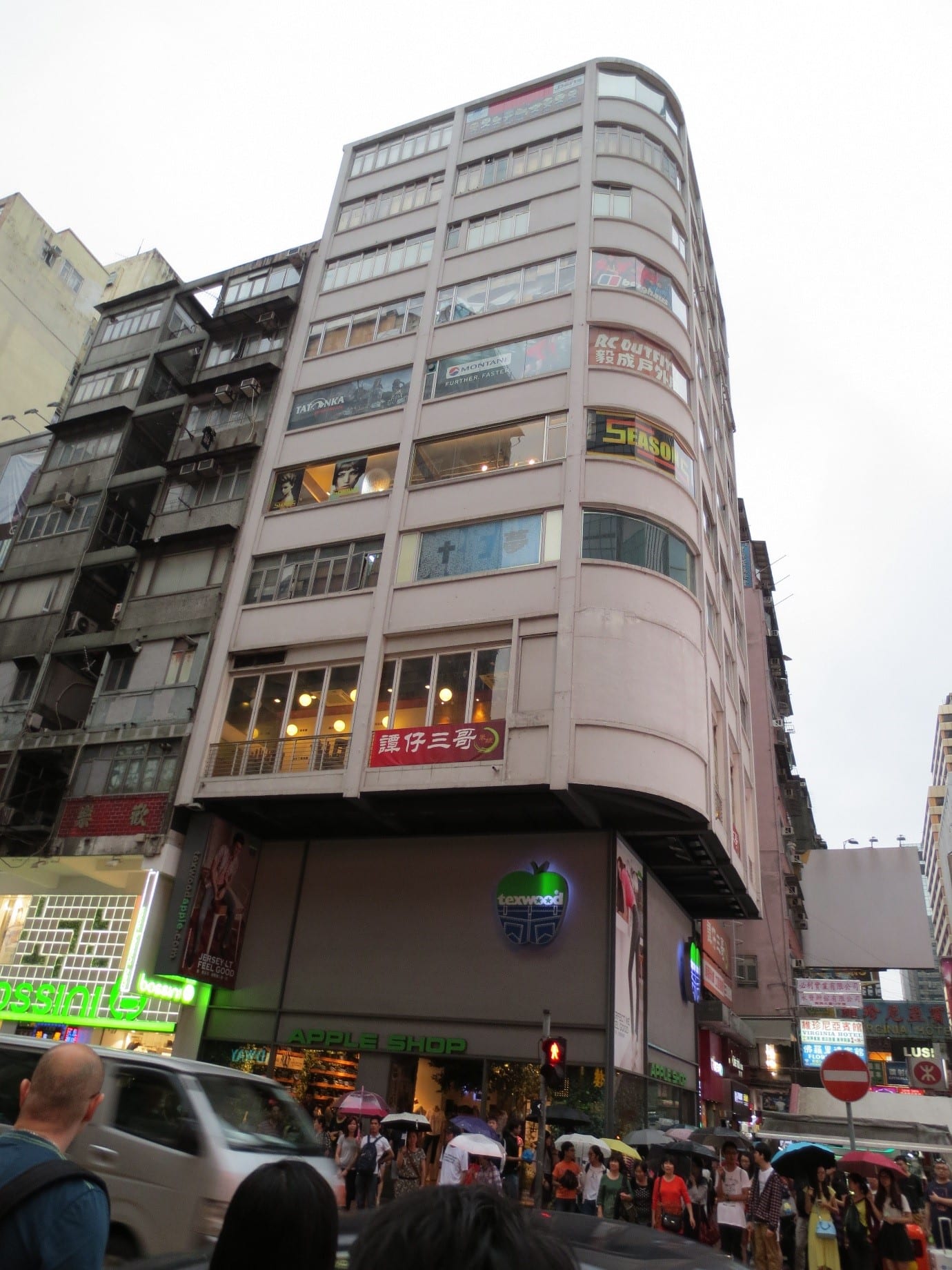 Wolf points out that by the beginning of the 1960s, government authorities were anticipating buildings of greater height to meet the demands for economic growth. They began to rethink the volumetric method of urban property development since this could create an unacceptable environmental condition in which affected streets and pavements could become the dark bottom of canyons formed by high-rise buildings. The architectural form of the shop house has become a familiar sight in Hong Kong today: a free-standing high-rise residential tower block with open space all round, and perched on a commercial podium base that occupies the full extent of the building site. Wolf tells us that the tower-on-podium form of development marked the end of the characteristic volumetric expression of the 1950s and 1960s composite buildings. Corner Houses, an increasingly scarce specimen of the composite building genre, have now become a non-renewable species in Hong Kong’s vibrant urban milieu. The predestined future of Shop Houses as a unique typology is foretold by their decreasing numbers as the city redevelops.

As it stands today, there is little heritage protection for the post war (WW2) shop houses in Hong Kong. One would hope that ICOMOS becomes more involved in listing the architectural gems to resist the continued demolition of them and that municipal measures are developed to protect them.