The Minister For Planning Has Far Too Much Power 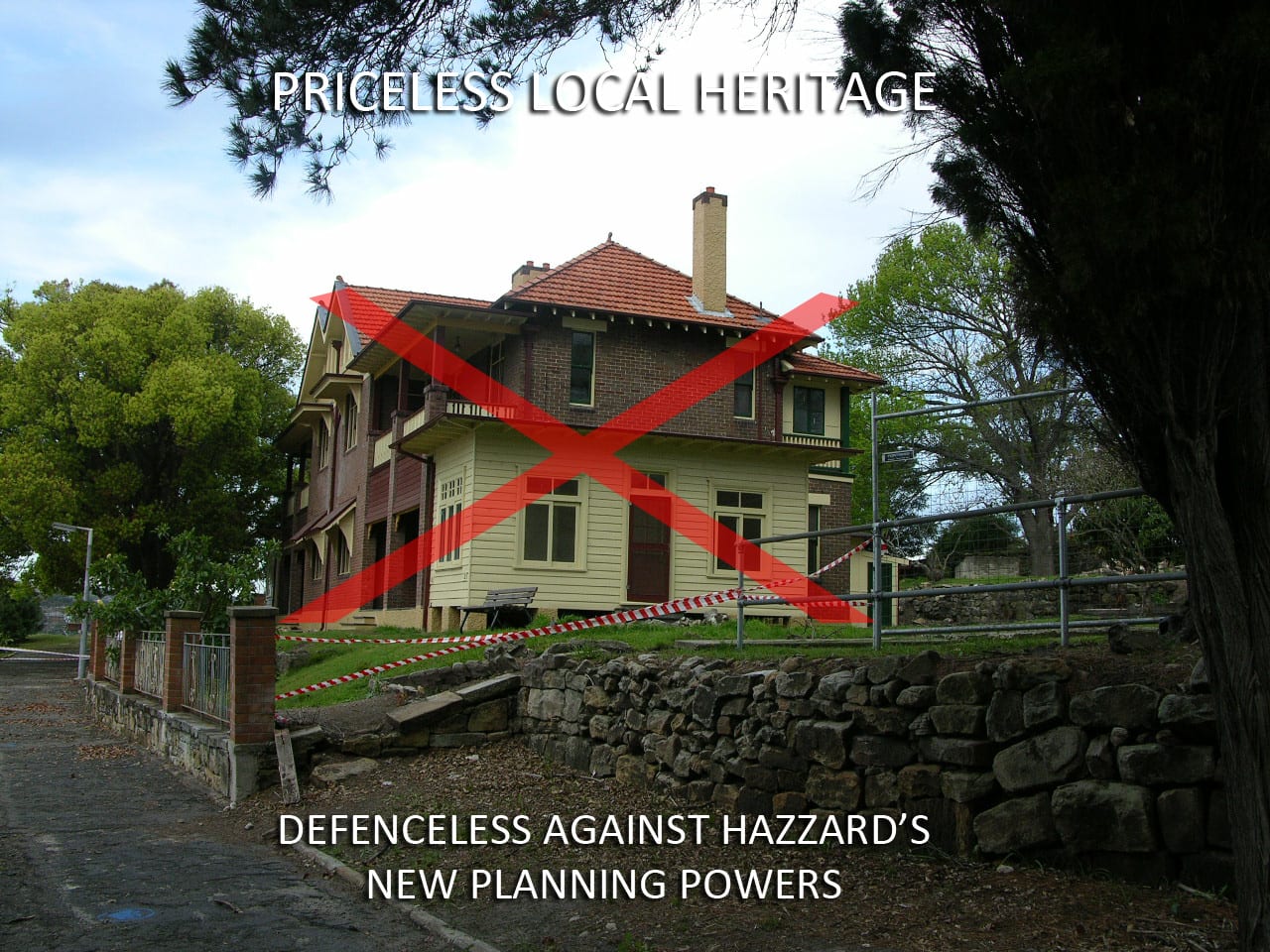 The dreaded NSW planning white paper and bills are re-emerging after being summarily defeated in the upper house in November last year. Now the minister and his clever advisors (too clever by half) have found a way of bringing them back without going through an irritating public parliamentary debate – that would be far too democratic and pointless.

The planning bills intended by the Liberal Government are unkind in two major respects. Firstly, the ability of the citizens of NSW to complain, disagree with or object to any proposed development in the state would be seriously curtailed. Secondly, in regard to local heritage, the Minister, at a whim, would have unilateral power to cancel listings, change their status, allow wholesale demolition and drive all related activity into a code-compliance approvals process. As if a code can be written for heritage. It cannot, and I say this with 30 years' experience in the field. There are no two heritage buildings that are similar.

One cannot even begin to try and process CBH (cultural built heritage) under code compliance. It would have to be done under a merits based system. That means that each application for development on a site containing listed buildings or deemed to be contributory in conservation areas should be assessed in terms of impacts as they are currently assessed under Section 79C of the Environment Planning & Assessment Act, 1979. However, under the proposed planning bills, local councils would be prevented from refusing code-compliant development. 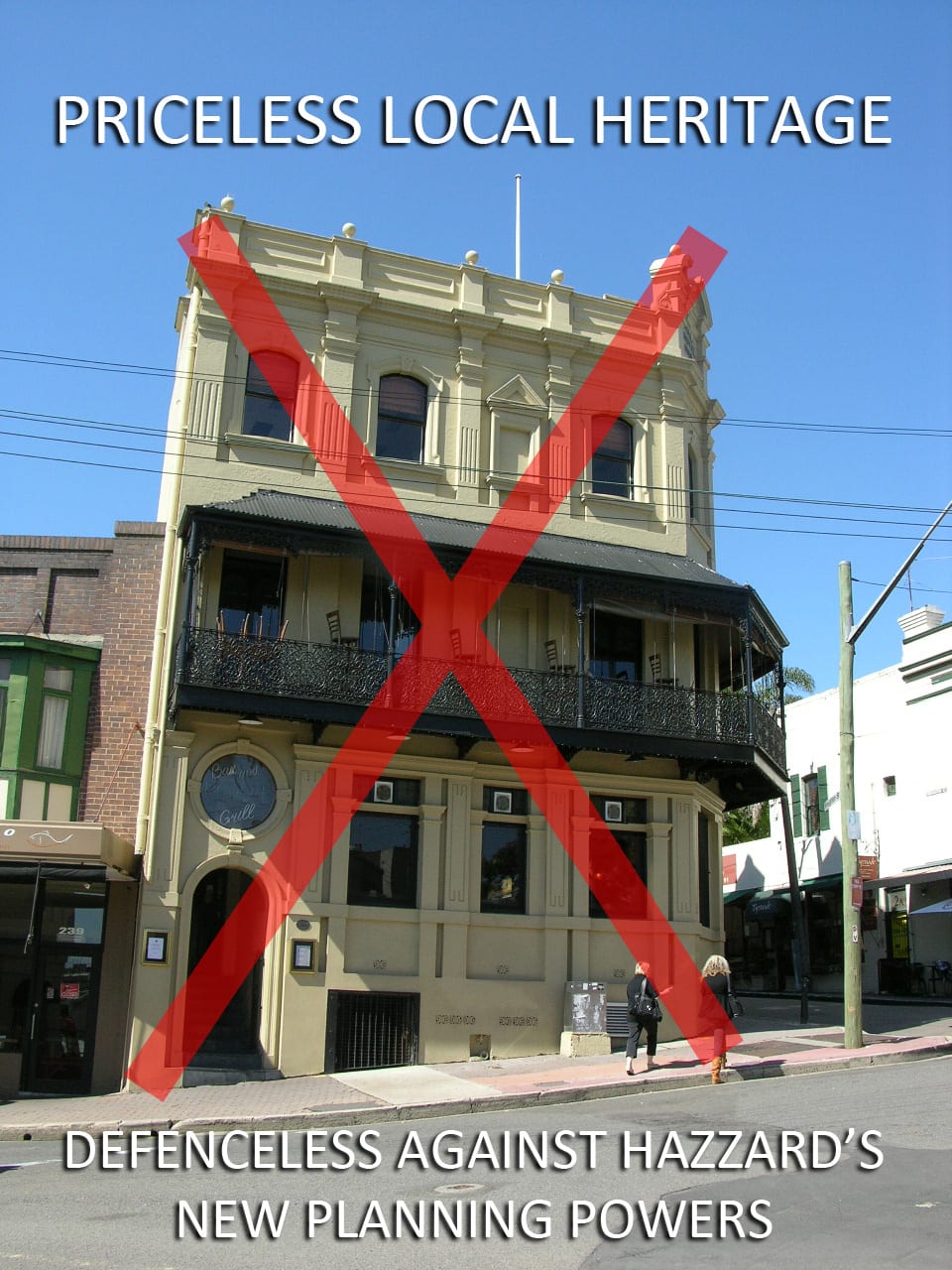 Every time the minister for planning, Brad Hazzard is asked about local heritage, he replies that everything under the current Heritage Act, 1977 would be kept in place but fails to add that the Heritage Act only protects some 1,600 State listed items. What about the 27,000 locally listed items and the 500 conservation areas spread out across the state? The Minister is ominously silent about this.

Too much red and green tape, he complains. "Keep the State of NSW open for business", he declares.

However, under the incipient legislation, we face a potentially horrific loss of most of our locally listed heritage stock including schools, hospitals, fire stations, court houses, police stations, electrical substations, houses, commercial and industrial buildings in our suburbs, our main streets and rural and coastal settings. It is these very buildings that define the character of our suburbs and communities. Imagine King Street, Newtown stripped of its Victorian facades. Imagine George Street, Sydney replaced with boring residential flat buildings. Imagine all these priceless gems going under the wrecking ball at the mere whim of the minister. A most hazardous course and far too much power for one man whoever he is.

In June 2013, the Environment Planning and Development Committee of the Law Society of NSW provided a submission in response to the White Paper and the draft planning legislation. It determined that the proposed new planning legislation would ".....at the risk of the community feeling excluded from decision making at a local level, be exacerbated by the imposition of targets for development imposed at a regional level and a mandatory target of 80% exempt and complying development at the local level". The Committee expressed concern that "....the new system needs to provide some counterbalance to offset the cumulative effect of this top down determinism in order to minimise the risk of community disenfranchisement".

The locally listed heritage buildings below face a real risk of being demolished unless something is done soon to stop the Minister for Planning gaining so much power – the power to ignore, the power to de-list and the power to demolish. 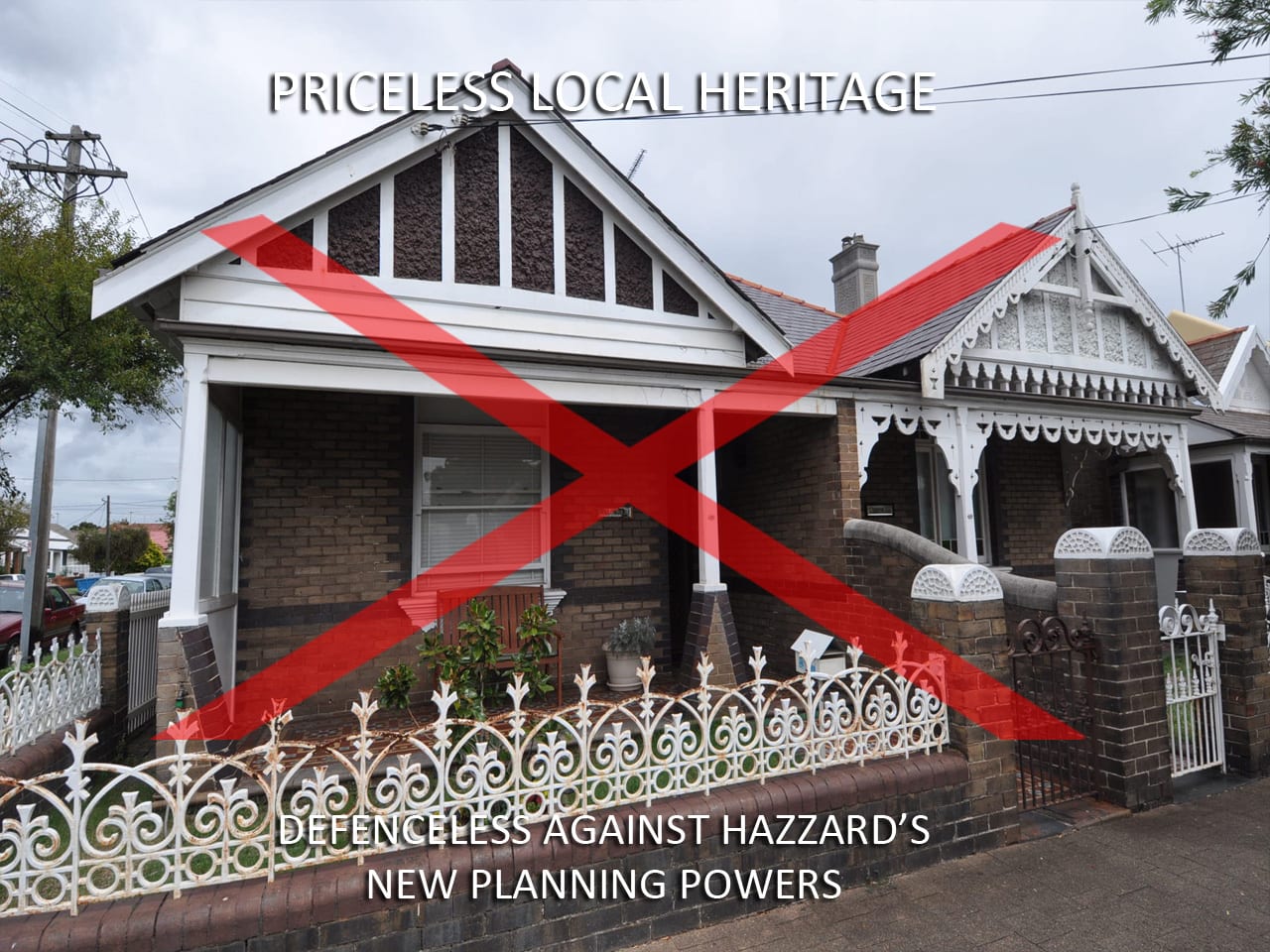 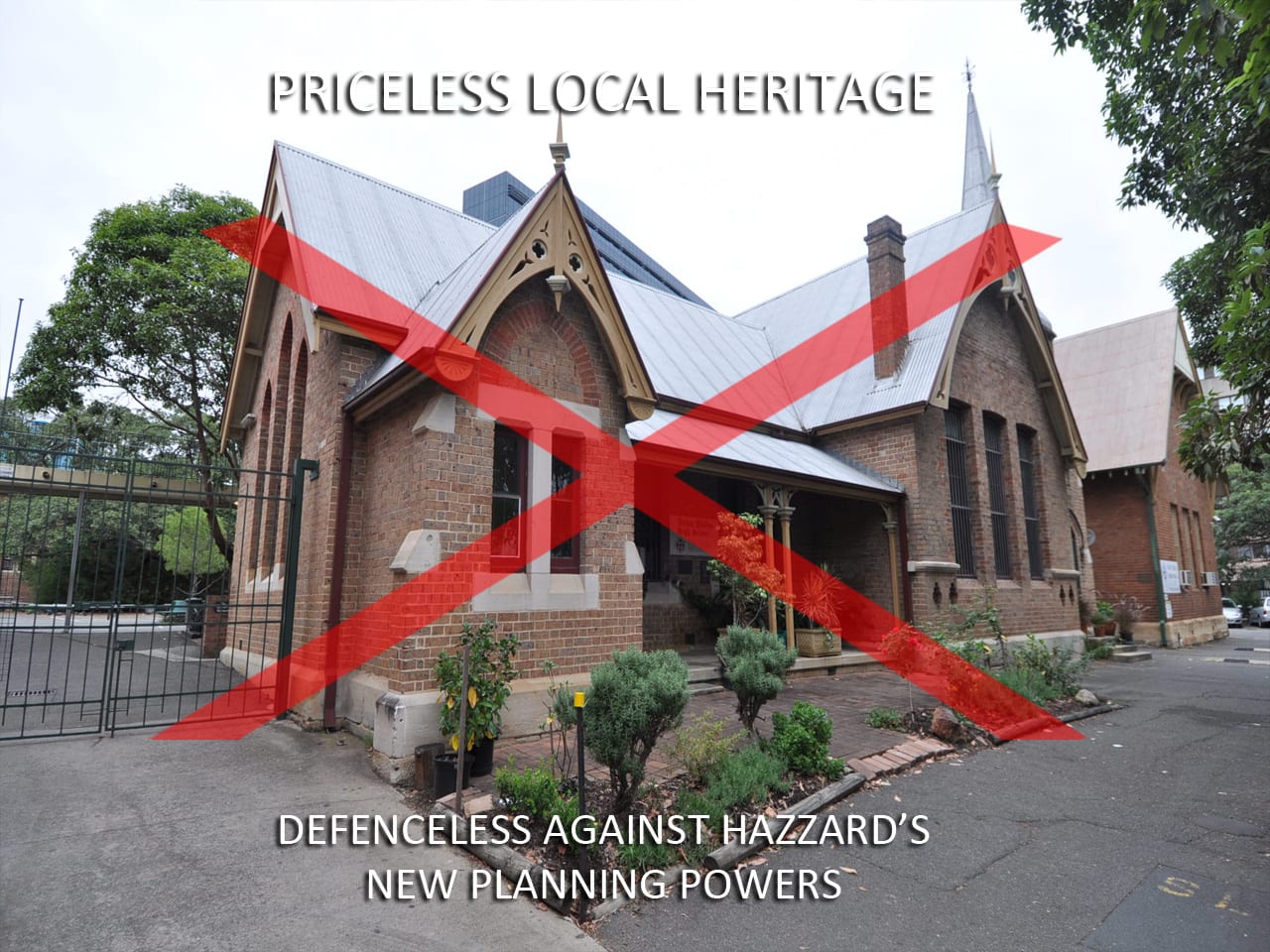 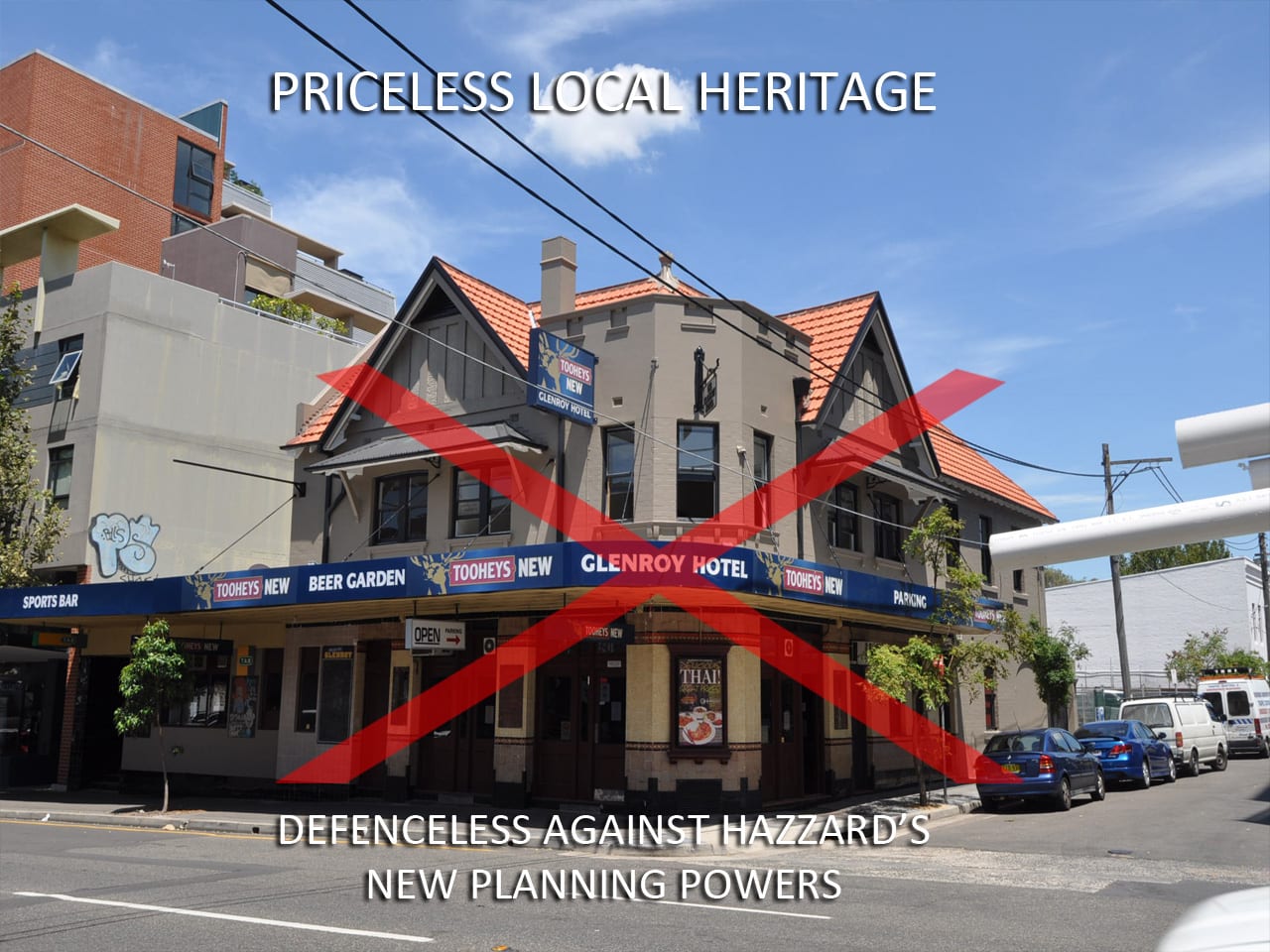 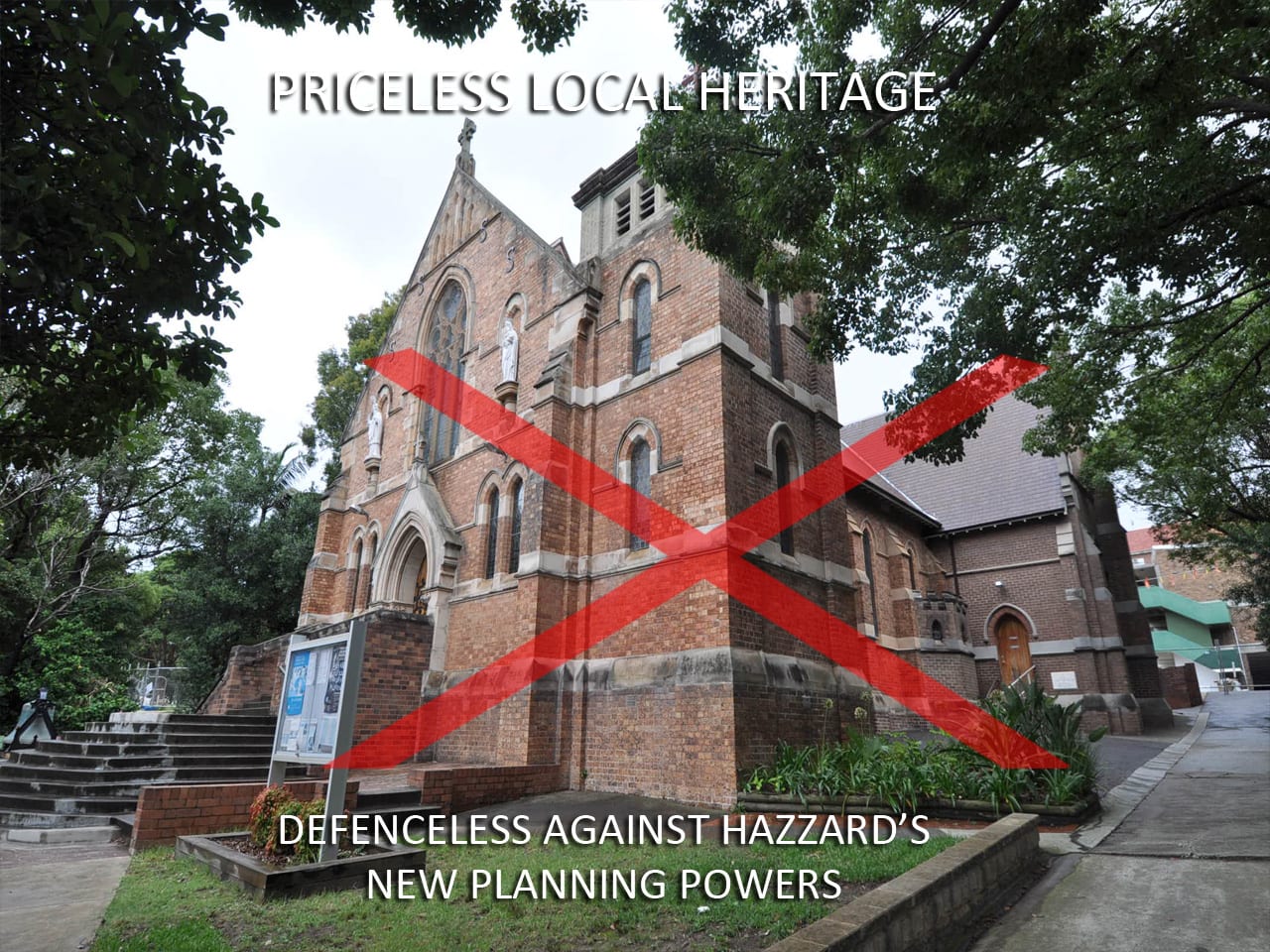 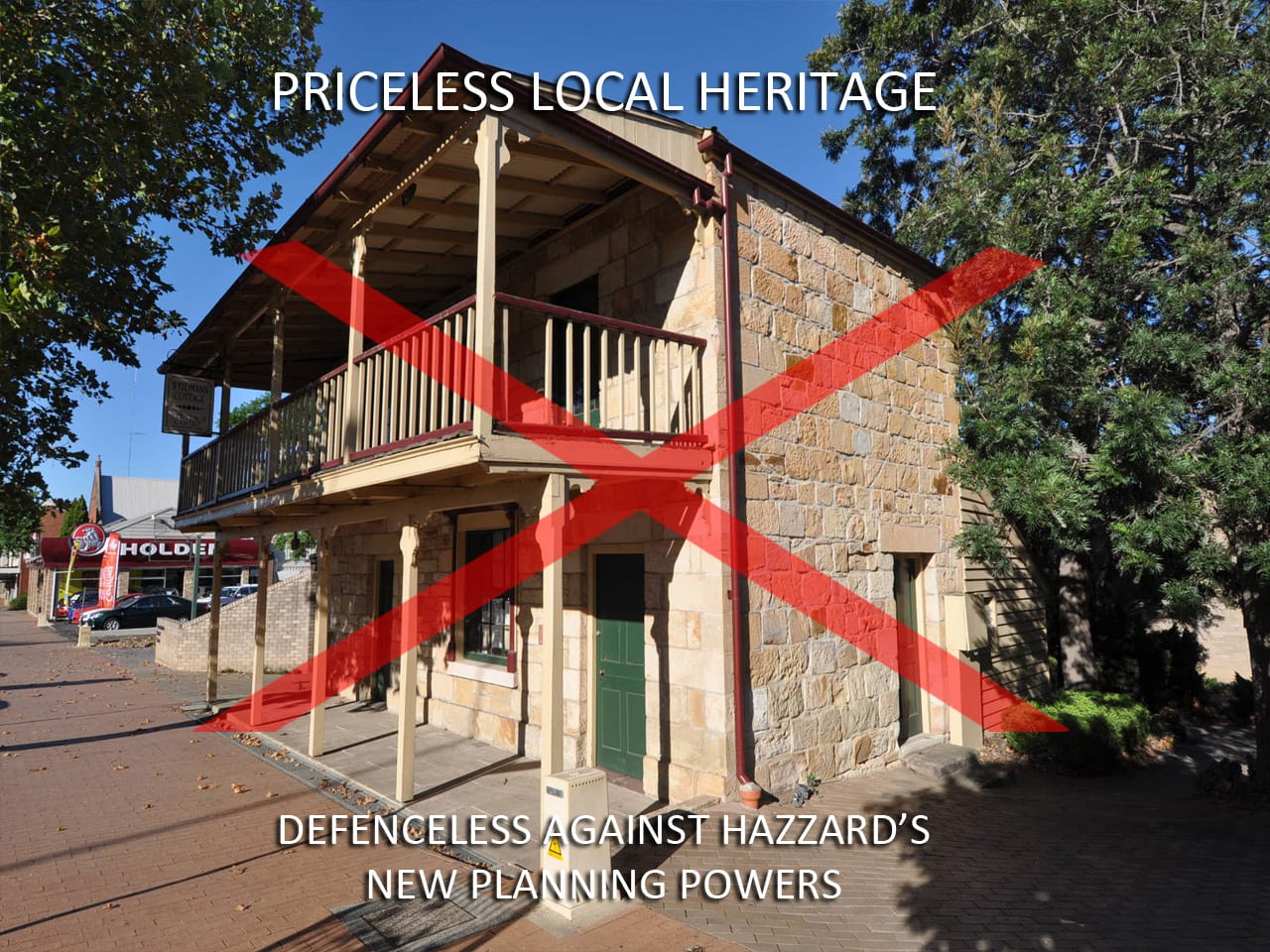